A time capsule back in history

Have you ever wondered, where does the name of Utrecht come from? Or what was the role of the city during the Roman era, and how did it thrive during the Middle Ages, followed by the “dark years” for Utrecht? These are some of the few highlights of the historical timeline of our magnificent city, so keep reading to find out more facts entwined with its rich history!

Origin of the name

Utrecht’s name was not chosen by accident but instead is closely related to the function of the city back in time. Its original Roman name was Trajectum ad Rhenum (or Fortress on the Rhine), and later re-named Ultrajectum. Traiectum became the Dutch “Trecht”, and the U comes from Old Dutch "uut" meaning downriver. Utrecht, and the Domplein, in particular, were where the Romans founded a castellum (fortress) to guard the fortress, but also to protect the other river – the contemporary Vecht.

Roman times and the development of Christianity

Throughout the years between 55 BC to around 410 AD, the Netherlands was in the territory of the Roman empire, and the Rhine river was the Northern frontier of the empire. Back then, Utrecht used to be the site for successive Frisian, Frankish, and Roman fortresses. It has also been an important centre for Christianity in the mid-7th century, as the first archbishop of Utrecht, the Frisian Saint Willibrord, was responsible for converting most of the Northern Dutch population to the new religion. Later on, the fortress in Utrecht and its surrounding lands became the base of the bishops, turning Utrecht into the centre of power for the Roman Catholic Church in the Netherlands. The reputation of a religious hub grew when other parish churches dedicated to certain saints were erected. Their stories are all interesting to hear, and the inquisitive should definitely check out the ones related to the prominent Janskerk and the Saint Mary’s church, both still breathing authenticity. All in all, Utrecht claimed its crucial role as a center of Christianity, as even the last non-Italian pope, Pope Adrian VI, was an Utrechter, who got elected back in 1522.

Medieval centuries and the history of the Domplein

Utrecht, as every medieval town, has its fair share of squares. But Domplein is in the spotlight, and it is not only due to the highest tower in the Netherlands with its 112 meters. The Domplein has preserved its eventful history throughout the centuries, and the city’s long history is still tangible there through visitor centers, tours, and events. It is also a great site to have some drinks and bites inside the quaint cafés and bars nearby or indulge in a blissful stroll on an early morning in the weekend. But would you be surprised to know that whenever being there, you are inadvertently in proximity to the Roman remains, which were excavated by archaeologists back between 1929 and 1949? If not, you can pass by and observe them through the glass coverings at the Domplein. And teleporting back to the 13th century, we would encounter the Cathedral of Saint Martin being connected to the Romanesque Dom Tower inside the Roman fortress. The Gothic-style cathedral took about 70 years to be built, but unfortunately, the earlier stage of construction was interrupted by a massive fire in 1253. It lasted for nine days, ruining many of the surrounding buildings, including an imperial palace cast. This took away much of the original glory of the palace, however, nowadays some fragments can still be seen in the underground cellar of the Walden restaurant. Following that, the magnificent Dom Tower was built, but the central nave had to be discontinued as it was not subsidized enough. After its completion in 1520, some years passed until the next interruption, namely the detrimental storm of 1674, which abolished the nave that connected the Cathedral and the Dom Tower and was never rebuilt. Nowadays the chapter room, joined to the church by a Gothic cloister, is the main assembly hall of Utrecht University. Despite the several troubles that occurred throughout the centuries, today these magnificent buildings create such symbiosis that strikes everyone passing by!

To avoid being too verbose, I would advise you to pay a visit to the DOMunder, which is right in front of the Dom Tower. It is a tourist attraction collecting two millennia of the fascinating history of Utrecht. The underground voyage of discovery showcases exhibitions of archaeological treasures, dating back to Roman times, when the Rhine river passed through our city as we know it today. Unfortunately, due to the current circumstances, it is closed for the time being, but once it opens, make sure to go there and explore excavations dating 2000 years ago!

Utrecht as the Dutch trade center

It was 1122 when Utrecht was granted city rights by Henry V, and as early as 1304 it already had a city council. Bright years were yet to come then; during the 11th and 12th centuries the city prospered, and it became the capital of a powerful principality. As you may already have heard, Utrecht was a key trade center in the Northern Netherlands. The favourable location on the banks of the well-known river Rhine allowed for the digging of channels and the construction of the wharf system as the inner-city harbor. On the wharves, storage facilities were built, and above them were the main streets. The merchants did not have to worry about logistics, since the cellars were at water level and easily accessible from everywhere. However, they were also at risk when water levels got high and the channels had to be constantly dammed, which was burdensome. But thanks to the efforts of its bishops, Utrecht persevered and had a pivotal role as a cultural, commercial, and industrial centre, and only in the 15th century, it was surpassed by Amsterdam in these regards.

The Republic of the Netherlands

Later on, the Spanish occupation led to the revolt of the locals who wanted to pull a local Spanish fortress down. The unrest led to the signing of the “Union of Utrecht” by the seven provinces to the North, doing it in an attempt to combat the Spanish rule. This treaty turned out to be the foundation of the Dutch Republic and later the kingdom. But in the late 16th century, the new predominantly Protestant state abolished the bishoprics, including that of Utrecht, and the bourgeoisie was faced with a lot of restrictions and control, making the province of Holland dominating in power. These were dark times for Utrecht as its trade and development stagnated. On top of that, the French invasion conquered the fortified city for two years, which were the so-called “Disaster Years”, followed by the occurrence of the devastating tornado that demolished large central areas. But after the storm always comes sunshine, and in 1713 Utrecht became one of the pioneers in hosting an international peace negotiation - the Treaty of Utrecht, which settled the War of the Spanish Succession. This step brought more structure to the city, making it the worldwide centre of the non-Roman Old Catholic Churches. This event also paved the way for European cooperation and conflict management, since the European Union and the United Nations followed its model.

Needless to say, the scope of this blog post cannot cover all the fascinating episodes of the chequered past of Utrecht, but you can dive into it by visiting the numerous museums, many of which are located in the Museumkwartier part of the old town. Highly recommended is to join the cultural Sundays, when several organisations offer thematic tours for free or a reduced admission fee. Once permitted again, these initiatives are a great way to acquaint yourself with the affluent history of our lovely Utrecht, so don’t hesitate to take part in them and share with us some curious stories! 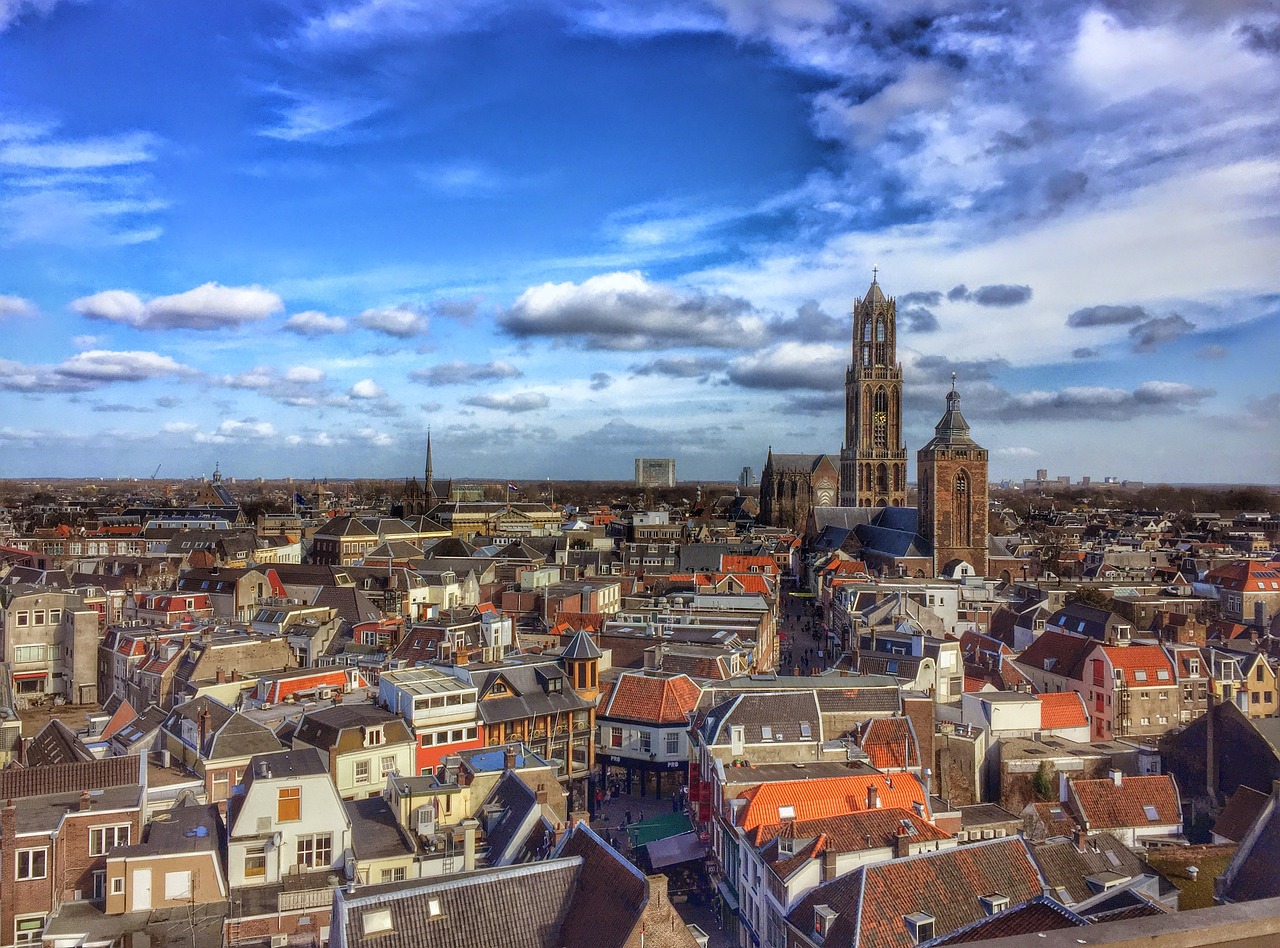 Submitted by Journalism Committee on 17/12/2020 - 00:00.
Categories:
Discover The Netherlands, Mysteries and Histories
Back to top